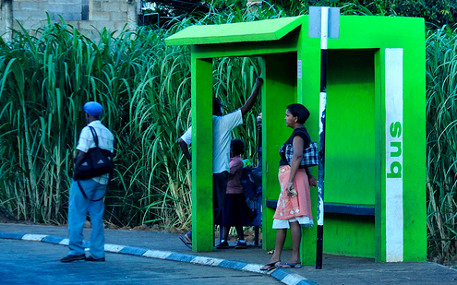 If you're looking for a fun, cheap way to explore Mauritius, then bus transportation is the answer for you. The bus routes criss-cross the entire island and you'll also have the chance to meet the chatty local people.

There are two types of buses in Mauritius, standard and express. Use the express ones if you can. They are airconned and much faster since they don't stop every few meters like the standard ones do. Buses operate from 5.30 am - 8.00 pm in built up areas and 6.30 am - 6.30 pm in the countryside, however there's also a late service between Port Louis and Curepipe until 11:00 pm. To give you an idea about the journey times: a trip from the airport to Port Louis might take up to 80 minutes.

Usually, there are buses every fifteen minutes or so on the major routes. Express buses are less frequent. In country areas, buses can be few and far between.

Keep in mind that there is no direct bus from one end of the island to another so you might need to transfer. To make things even more complicated, there are 2 main bus stations in Port Louis: one for buses going to the south of the island (Victoria square), and another one for buses going to the north (Imigration square). There is a bus shuttle between the two stations, but the distance can also be walked.

In terms of price, a bus ticket is very cheap, from 15 Rs (~ 40 eurocents) for a short trip to 30 Rs (~ 70 eurocents) for a long one, so you might want to to keep some change in your pockets. The express buses have an air-conditioning system, but you will be charged extra for that little cold breeze. Also, if you travel with a large bag, you might have to pay for an extra seat.

You can buy the tickets from the conductors and you will need to keep the ticket as there are inspectors that often get on board. Unfortunately, there is no such thing as an operator independent ticket which could be used across the island, so you will need to buy a ticket each time you get on a bus. When you want to get off, you're expected to press the buzzer beforehand. Even though the buses are in different states of disrepair, the fleet is gradually being upgraded.

There are two main companies that operate throughout the island: the United Bus Service (UBS) and the National Transport Corporation (NTC), known also as the "blue bus". These companies, along with Mauritius Bus Transport, are run by the National Transport Authority from Mauritius. There are also other smaller companies running fleet of buses on the same routes where demand is high. You may encounter for example RHT, Rose-Hill Transport, on routes to and from the town of Rose-Hill and TBS, Triolet Bus Service in Triolet, a village in the north.

The only downside to the bus is that your trip will take longer than with a car/taxi, as every time someone needs to get on or off, it means another stop.